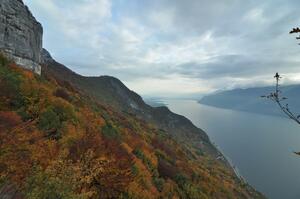 Lying on the shores of Lake Bourget - the biggest natural lake in France - and at the foot of the 1550-metre high Mont Revard, Aix-les-Bains can justifiably claim to be one of the most beautifully situated cities in France. The city, with its numerous parks, gardens, floral displays and fountains, provides a harmonious counterpoint to this exceptional natural environment. It is little wonder, therefore, that this modestly sized city of 26,000 inhabitants has been awarded the Grand Prix in both the France in Bloom and Europe in Bloom (Entente Floral) competitions.

Mont Revard, a vast plateau that rises to an altitude of 1550 m, is the gateway to the Bauges Regional Park. With its mixture of forests and alpine pastures, the area has kept its soul, its traditions, its colourful flora and its exquisite cheeses (tome des Bauges, gruyère des Bauges, tome de chèvre, etc.). 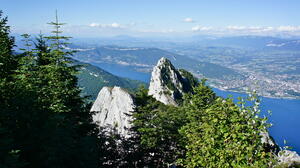 When the glaciers of the Quaternary Period withdrew 19,000 years ago, they left an immense lake that is fed by surrounding rivers and streams. This «inland sea» is surrounded by the last outposts of the Jura Mountains: to the west, the precipitous, untouched slopes of the Epine emerge abruptly from the waters of the lake; to the east, gentler slopes rise up from the shore past the villages of Cessens, La Chambotte, Corsuet and Tresserve.

Lake Bourget is the largest natural lake in France.

Natural because it was formed by glaciers. Natural, because its shores remain unspoilt - its uninhabited and inaccessible western shore has been dubbed the “wild coast”. Seen from the lake, it looks like an island, with its bays and moorings. And natural because its ecosystem has been preserved. The reed beds at the northern end of the lake are home to ducks, coots, grebes, moorhens, herons and even a few cormorants.